You are using an unsupported browser. Please update your browser to the latest version on or before July 31, 2020. 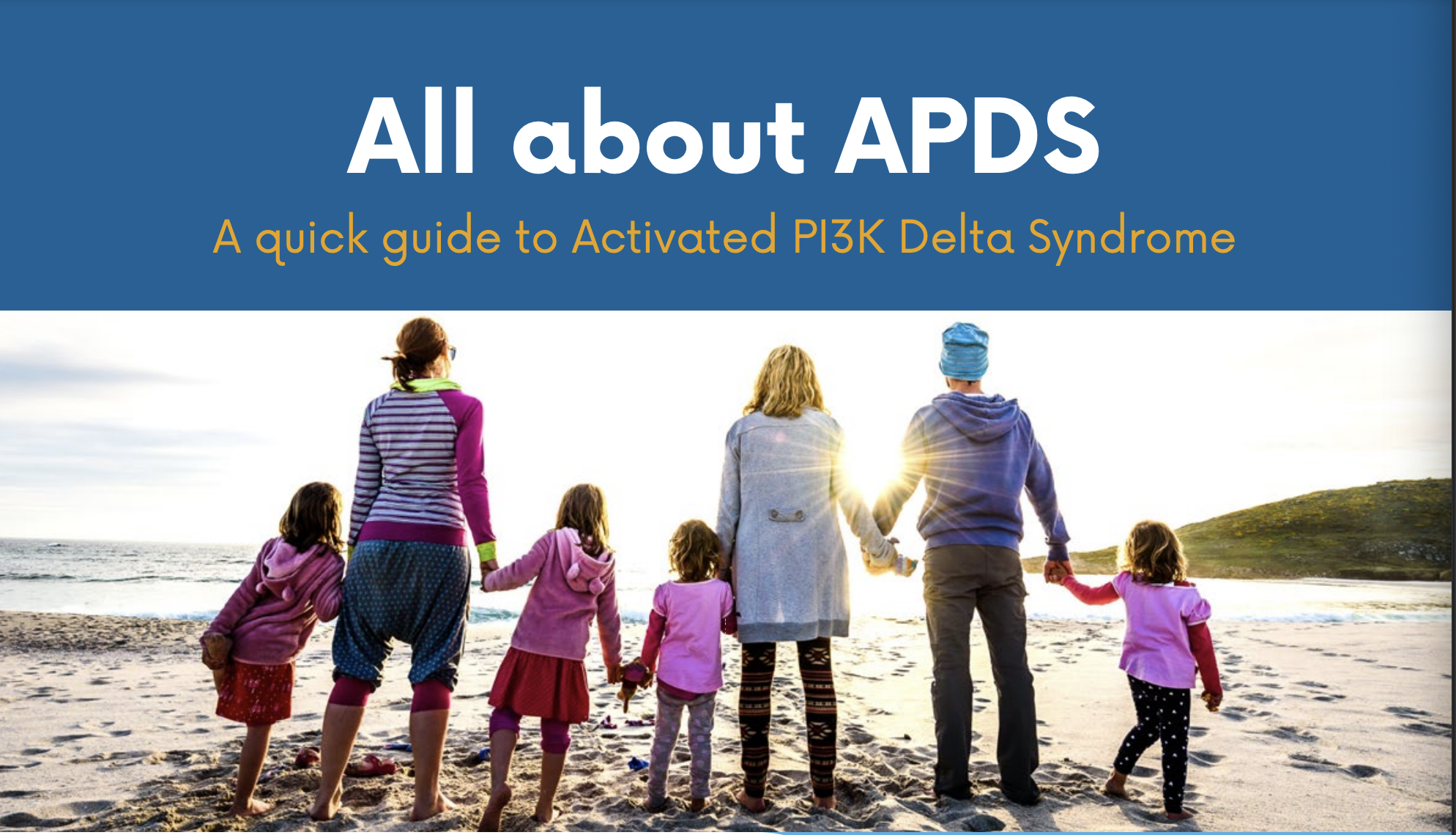 APDS (previously known as PASLI* disease) is a rare primary immunodeficiency (PI) disease that was first discovered in 2013.1,2 It is caused by variants in either one of two identified genes known as PIK3CD or PIK3R1, which are vital to the normal development and function of immune cells in the body.

Impact on People with APDS

Symptoms of APDS vary widely but often begin in infancy with frequent and severe sinopulmonary (respiratory tract, sinus, and ear) infections. Immune dysregulation symptoms are also frequent and appear later in childhood, including lymphadenopathy (swollen lymph nodes), splenomegaly (enlarged spleen), autoimmune cytopenias (low numbers of blood cells due to destruction by the immune system), and enteropathy (digestive tract issues like diarrhea). Eventually, bronchiectasis (permanent lung damage) and lymphoma (cancer of the immune system) can develop. It’s important to note that not everyone experiences all these symptoms. Even affected people from within the same family may experience different symptoms from each other.

According to Nicholas Hartog, MD,** “Typically, a person with APDS will present to a hospital within the first 5 years of life with a predominant and recurring respiratory tract infection. They can also present with swollen lymph nodes. Unfortunately, these general patient symptoms often result in medical professionals prediagnosing a range of autoimmune disorders before a primary immunodeficiency (PI) diagnosis is considered. Even if a PI classification is given, a patient can be misdiagnosed with common variable immune deficiency (CVID) and hyper IgM. This leads to APDS patients being cared for by a variety of physicians, and managed by treatments that don’t address the underlying genetic defect.”

While symptoms can vary, APDS should be considered in patients with two or more of the following:

APDS is inherited in an autosomal dominant manner, meaning that a person needs the disease-causing gene variant from only one parent to potentially have it themselves. Other family members may be affected, yet present with varying symptoms.

Individuals in the United States and Canada who present with a clinical picture associated with APDS may be eligible for genetic testing, and pre-test and post-test counseling, at no charge, under a sponsored genetic testing program called navigateAPDS. For more information about testing, counseling and eligibility visit: www.navigateAPDS.com

Management of APDS is symptomatic. Antibiotics and antivirals may be used to treat or prevent recurrent infections. The majority of patients have antibody deficiencies and may receive immunoglobulin replacement therapy (IRT). mTOR inhibitors such as sirolimus (rapamycin) have been used to manage lymphoproliferation.

Rituximab is one of many immunosuppressive treatments used for autoimmune complications. For patients with the most severe or life-threatening complications, hematopoietic stem cell transplantation (HSCT) has been used to correct the underlying dysfunction, though with a high risk/benefit consideration.

Selective PI3K delta inhibitors that target the root cause of disease are currently being studied in clinical trials and have the potential to offer a targeted treatment option for patients with APDS.

Leniolisib – an investigational drug not yet approved by the US Food and Drug Administration (FDA) – is an oral selective PI3K delta inhibitor currently under investigation for the treatment of APDS.

According to Dr Nicholas Hartog, “Patients may have multiple complications though lack a unified diagnosis.”

Patients with APDS often develop conflicting symptoms such as autoimmune and inflammatory complications with frequent severe infections. Some patients have been first diagnosed with lymphoma, not realizing that APDS was the cause

Family variant testing is recommended for family members of patients that have been positively identified. The navigateAPDS program offers sponsored, no-charge genetic testing for all immediate family members previously diagnosed with APDS.

Leniolisib, an oral selective PI3K delta inhibitor, is currently being investigated in patients with APDS. If you are a physician and would like more information, or are interested in participating in future clinical trials, please visit www.pharmingclinicaltrials.com

KEEP UP TO DATE

If you are a patient or caregiver and would like ongoing information about APDS events, insights, news, and education, register your details here: www.pharmingapds.com

Feedback
4 out of 4 found this helpful